On June 23, Enos & Susan Martin and Tom Harp participated in the United Way “Day of Caring” event at the Allentown YMCA. They were joined by two volunteers from B.Braun Medical. After greetings and introductions by Allentown Y staff, we were led on a tour of the facility. There have been many very impressive renovations to the facility over the years. They have a modern, start-of-the-art fitness center along with exercise studios and of course their indoor Olympic-sized swimming pool. They have the only salt-water pool within 97 miles! They also serve over 160 children in their Day Care program. Our project was to renovate their food pantry on the second floor. Our first task was to demolish and remove old wooden shelving. That was actually fun! We banged away, dismantling the shelving and moving it out the door. This was followed by sweeping up and cleaning the walls, which were quite filthy from decades of inaccessibility. After lunch, we primed the walls and began assembling new metal shelving for the pantry room. Later in the week, additional “Day of Caring” volunteers from UGI were scheduled to apply finish coats to the room and reposition all the shelving to be stocked up again. This was a fun and worthwhile project that was greatly appreciated by the YMCA staff. 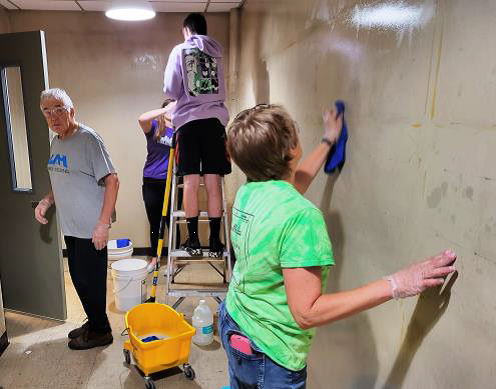 PrevPrevious75 Years Ago – June 1947
Next2022 Arts & Crafts at Hays ElementaryNext

You can help children